Skip to content
Tweet
Share
Share
Pin1
Share
1 Shares
American actress and real-life California girl, Michelle Pfeiffer was born in Santa Ana on April 29, 1958. At 25, her breakout role in Scarface put her in the limelight. That was back in 1983. Now at the age of 62, transitioning from a sex symbol to an “aging actress” hasn’t been an easy road. Here are 8 tips that she teaches us about aging with grace.

Moving away from the hustle of Hollywood to a ranch in Northern California, Pfeiffer has said, “you go away on vacation…you come back and you get that stressed feeling right back again. It’s very toxic.” Being older and wiser gives clarity to what is or is not acceptable. You can afford to be more selective about the jobs you take on. With age comes acceptance of who you are and what you’re willing to put up with. Your youth is spent trying to make something of yourself. Now it’s time to reap the rewards of those accomplishments and stop sweating the small stuff.

In a 2012 visit to the Good Morning America set, Pfeiffer confessed, “I haven’t always been healthy.” By her own admission, her 20s diet consisted of Coca Cola and up to two packs of Marlboro Lights. “Vanity is right under there,” she tells Dr. Sanjay Gupta in a 2012 CNN interview. She saw a clip where former President Bill Clinton talks about preventive measures against heart disease. That grabbed her attention. After reading Prevent and Reverse Heart Disease: The Revolutionary, Scientifically Proven, nutrition-based Cure by Dr. Caldwell Esselstyn, she made the decision to adopt a plant-based, oil-free vegan lifestyle. Now in her 60s, her main focus is to live a long and healthy life.

Michelle Pfeiffer is an exercise advocate and attributes her great figure to running on her treadmill four to six miles a day. She also uses free weights and tries to go to the gym five days a week. In an interview with Liz Smith for Good Housekeeping, Pfeiffer says, “And the older you get, the less you can cheat. So now I’m more health-conscious than I used to be.” There is something to be said about maintaining a daily exercise routine: reduces the risk of coronary heart disease, high blood pressure, and diabetes. Exercising also reduces anxiety and depression and maintains healthy bones and muscles.

A positive attitude will give you altitude. In the October 2013 edition of Ladies Home Journal, Pfeiffer said, “Once you get over a hump there actually is less pressure [to be sexy].” Studies through the Mayo Clinic and top medical research institutions have proven that a positive attitude lowers the risk of heart disease, especially in older people. Ken Budd, executive editor of AARP The Magazine has said, “It’s feeling grateful for what you have instead of lamenting what you lack. From an aging standpoint, it can also mean accepting limitations without surrendering to them.” Pfeiffer would concur, as she’s been quoted by saying, “Even though I don’t feel I need approval, it’s still important to me to give a good performance.”

5. Finding a balance between work and home

Pfeiffer has stated given a choice between work and family, family always wins. This is why it is no surprise she did what many actresses fear: stepping out of the limelight. When her children were younger, she brought them to the set and continued on with her career. There was a point when the kids got older and she needed to make a decision. She’s remarked, “When they’re babies you just sort of throwing them in the car seat and they go where you go.” Her goal was to create a sense of normalcy for her children. In the 1990s she began to trim down her work schedule. From 2003 to 2007, she took an acting hiatus to be closer to family. At that time, they moved the family from L.A. to northern California. The obligations of going to every gala event or screening waned, freeing up more family time with less distraction.

Now that her children, Claudia Rose and John Henry, are in their 20s and in college, Pfeiffer has contemplated life as an empty-nester. A solid marriage to David E. Kelley, TV writer and producer, they make time to have a weekly date night. Pfeiffer has more time to pursue her love of acting, directing, and producing films. An artist in her own right, Pfeiffer admitted, “When the kids were in school I painted, mostly portraits. I got so immersed in painting that I didn’t read scripts or return my agent’s calls.” She also supports charitable causes. Between her history as a smoker plus a niece who battled leukemia, The American Cancer Society is at the top of her list.

7. It’s okay to mourn the passing of youth

Now that she’s in her 60s, a predominant question Pfeiffer is inevitably asked is how she feels about aging. Time and again her answer has been the same. “I don’t think it’s easy for women to watch themselves age.” In a separate interview she has stated there is, “a mourning process to that but, you know, it’s kind of liberating. I don’t need to look younger than I am.” Indeed, watching yourself age, whether in pictures or on the big screen can be difficult on anyone’s psyche. Once you come to grips that you aren’t getting younger, you can focus on living the rest of your life to its fullest.

8. Remain humble and go with the flow

When asked about her ten-year goals, she proclaimed it was too far in advance to think about. In her youth, she never considered herself a beauty, even though she’s been named one of the 50 Most Beautiful People in the World by People Magazine six times. In a 2007 interview, she said, “All I really care about is that I’m able to age gracefully and that I don’t ever look like a wax figure of myself.” With her brilliant screen performances, no one would ever guess she’s quiet and shy. “It takes years for me to trust. I am so private and reluctant to make myself vulnerable. [But] you have to be vulnerable to have real intimacy with people.” That comes with age and wisdom. 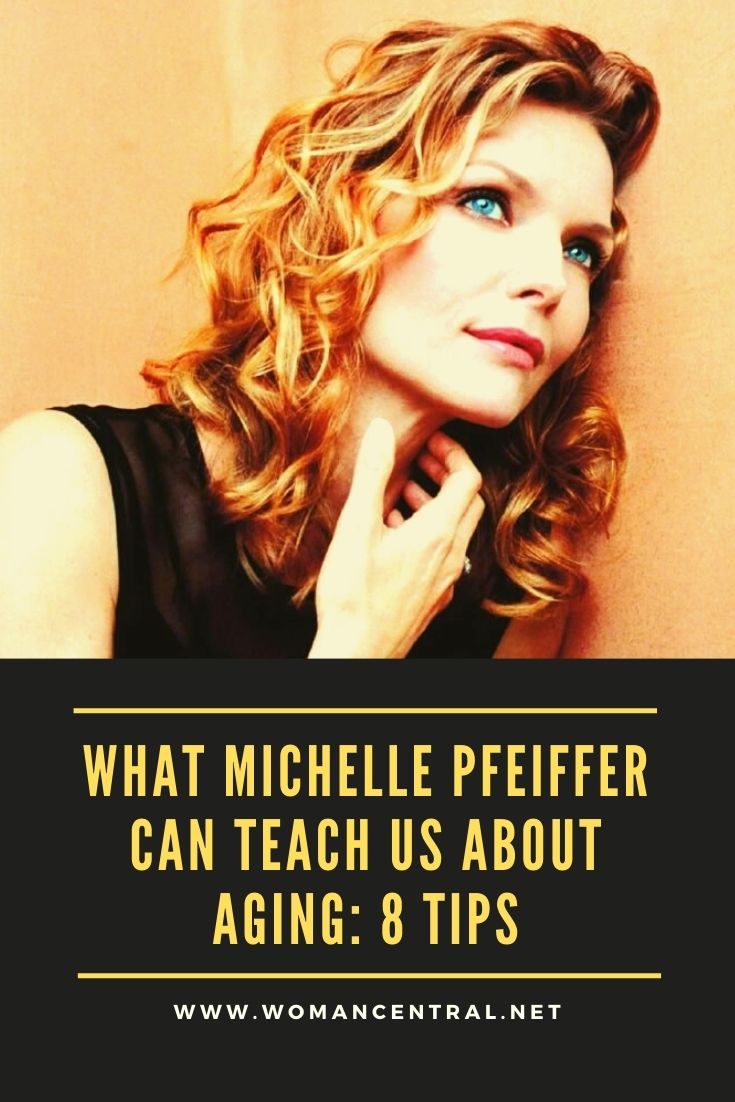